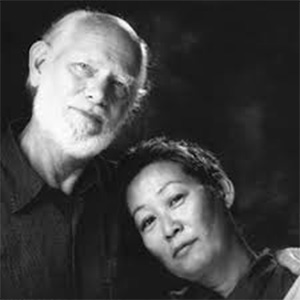 ANDRIES VAN ONCK
Born in Amsterdam in 1928. 1959 he started as a designer at Olivetti in Italy assisting Ettore Sottsass; 1965 he opened his own studio in Milan and his wife Hiroko Takeda joined him later. They created many products in different sectors, such as household appliances, furniture, machine tools and electronic equipment. From the very start he is concerned in the theoretical aspects of design, such as design language, morphology and semiotics, and he spent much time as a teacher, wrote articles and also the book Design. Il senso delle forme dei prodotti, Lupetti 1994. He received numerous awards: MACEF Award, SMAU Award, Compasso Doro, selection for Forum Design Award. His work has been exhibited in several museums and exhibitions and is part of the permanent collections at Chicago, London, Paris and Amsterdam Museums.

HIROKO TAKEDA
Born 1945. She graduated at the Tokyo Academy. Between 1968 and 1972 she cooperated with various Japanese furniture design companies. She designed household appliances for Zanussi and Bertazzoni, intercoms and videophones for Amplyvox, cutlery for Serafino Zani, furniture accessories for Magis. In 1979 she was awarded the Compasso dOro and shortlisted in the editions of 1981, 84, 87 and 95. In 1992 she has received the Forum Design Award. She has taken part in several international design exhibitions and her work is in the permanent colllections at Chicago, London, Paris and Amsterdam museums. She has lectured at places including ISIA in Rome and Florence and in Montevideo (Uruguay) on the relations between Japanese aesthetics and western design. Since 1998 she has been teaching product design at Milan Polytechnic faculty of industrial design. She has written articles for Essay from Milano column of the Japanese magazine Designers Workshop (1993-1995); for Vivere in Italia column of the Japanese magazine Feminas (1995) and for Oversea Report column of the Japanese magazine Library (1997).