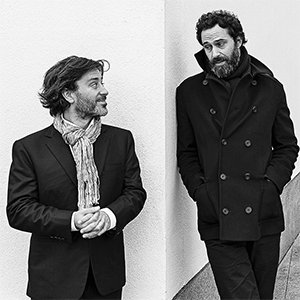 Edward Barber and Jay Osgerby studied Architecture together at The Royal College of Art in London and established Barber Osgerby in 1996.
Over the past ten years Edward Barber and Jay Osgerby have worked across a wide range of disciplines to create everything from furniture, lighting, household products, restaurants, shops, drinks bottles and electronic products for companies based in Europe, Asia, North and South America.
In 2004 Barber Osgerby were awarded the Jerwood Applied Arts Prize for Furniture, the UK’s most significant applied and decorative arts prize. This led to a commission to design furniture for the De La Warr Pavilion, Britain’s most important modernist building. The resulting die cast aluminium chair is now in the V&A Museum collection. In 2005 the Zero-In table was launched by the British producer Established & Sons. The table employs car industry techniques in its construction, never before used in the furniture industry. In May of the same year, in collaboration with Pantone, Barber Osgerby designed the central space for the International Contemporary Furniture Fair in New York. The now iconic multi-coloured Flight Stools where produced with corresponding Pantone reference numbers screen-printed on the side. More recently they have been commissioned to design the furniture for the entrance foyer of the Royal Institute of British Architects in Portland Place. They were also jointly named ‘designers of the future’ with Established & Sons at Design Basel / Miami in June 2006.
Barber Osgerby has since been developing collections for leading manufacturers and clients such as Magis, Authentics, Venini, Swarovski, Flos, Established & Sons and Panasonic. Both Edward Barber and Jay Osgerby have lectured at a number of design events and design schools, including hosting workshops at Ecal, Switzerland and the Vitra Design Museum. BarberOsgerby’s work is found in many permanent collections including the V&A Museum-London, Metropolitan Museum of Art – New York and the Design Museum, London.
Συνεχίζοντας σε αυτό τον ιστότοπο αποδέχεστε την χρήση των cookies στη συσκευή σας όπως περιγράφεται στην πολιτική cookies.
Αποδέχομαι