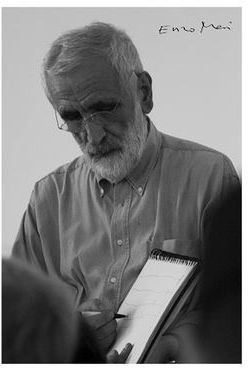 Mari Enzo was born in Novara in 1932 and studied at the Academy of Fine Arts in Milan.
While still training in the 1950s, as an artist he held one-man and group shows at the leading galleries and modern art museums.
He started his activity with studies on visual perception and then focused his attention on games for children, graphics, design and architecture: different directions sharing a common idea that is the reflection on the meaning of shape and project. He was consultant for Arredo Urbano of the Milan town hall and president of the Association for Industrial Design (1976-1979). He was awarded the Compasso d’Oro in 1967, 1979, 1987 and in 2001 for his table “Tavolo legato”. In 2001 he published the book “Progetto e passione” (Project and passion) which analyses the design on a wider cultural horizon. He collaborates with design companies such as Artemide, Castelli, Danese, Driade, Gabbianelli, Interflex, Lema, Magis, Zanotta.