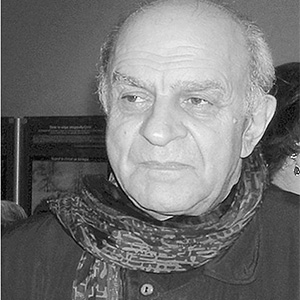 Alekos Fassianos was born in Athens in 1935.
He studied violin in Athens Conservatory and painting at the School of Fine Arts in the period 1956-1960 in Yannis Moralis’ workshop. He studied ancient Greek angiography and Byzantine iconography.
He attended lithography at the Ecole des Beaux-arts in Paris, with a scholarship from the French government (1962-1964), near Clairin and Dayez. In 1966 he settled in Paris and from 1974 he lives and works in Paris and Athens. Since 1959, he has performed more than seventy solo exhibitions in Athens, Thessaloniki, Paris, Munich, Tokyo, Hamburg, Zurich, Milan, Beirut, Stockholm, London and elsewhere since his first individual performance in Athens. He regularly participated in group exhibitions and well-known international events around the world. Fasianos also dealt with engraving, poster design and stage design, working mainly with the Athens National Theater (Kafka’s America directed by Alexis Solomou, 1975, Eleni of Euripides, 1976, The Birds of Aristophanes, 1978 et al. ).
He took the illustrations of several books in Greece and abroad, famous poets and writers and has illustrated Greek stamps among which one of the series of the Athens 2004 Olympic Games.
He has also published his own texts, poetry and poetry.
For his work, four films have been filmed for Greek and French television, and monographs are published that refer to his visual production.The characteristic style of Fassianos is formed in the early 1960s. Three main themes remained unchanged during his journey: man, nature, environment.
The study of Greek civilization and its involvement with the graphic arts and engraving influenced its painting. The first compositions are dominated by the form of the officer, with the inflatable, red cheeks, the fanciful suits in the outfit and the cartoon-evocative style. Gradually the figures move and become their own lives. They become pairs, filling the space, just touching one another, but they remain united in a mass.