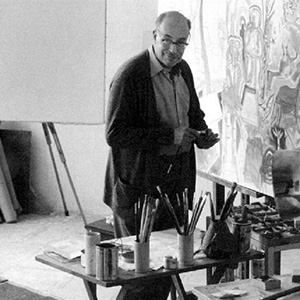 Nikos Hadjikyriakos-Ghikas was born in Athens on February 26, 1906.
A student of Parthenis in Athens, left in 1922 for Paris, where he studied French Literature and Aesthetics at the Sorbonne, and Painting and Printimaking at Académie Ranson with teachers Bissière and D. Galanis . He made his first exhibition in Paris in 1923 and then participated in many group exhibitions. His first solo exhibition was organized in Paris in 1927 in GaleriePercier, and was presented by Maurice Raynal. In Athens he exhibits for the first time in 1928, with the sculptor Mih. Tombros.

In 1935-1937 Ghikas collaborates with Dim. Pikionis. T. Papadzonis and S. Karantinos in the publication of “To Trito Mati” magazine. In 1941 he was elected professor at the headquarters of the Architecture School of the National Technical University of Athens, where he taught until 1958. In 1972 he was elected a full member of the Academy of Athens and in 1986 an honorary member of Royal Academy of Arts in London. He is awarded an honorary doctorate from the Architecture School of the University of Thessaloniki (1982) and an honorary Doctor of the Faculty of Philosophy of the University of Athens (1991).

Over 50 exhibitions of the artist have been organized from time to time in Athens, Paris, London, Geneva, Berlin, New York, etc. His works are in many private collections in Greece and abroad, as well as in museums such as Muséed ‘ArtModerne – Paris, Tate Gallery – London, Metropolitan Museum of Art – New York, National Gallery of Athens.

In 1991 the Gallery of Ghikas was inaugurated as an annex to the Benaki Museum, after the artist’s donation to the Museum.

In addition to painting, Ghikas also worked creatively with sculpture, engraving, scenography and book illustrations. He also wrote books, articles and studies on Architecture and Aesthetics, as well as essays on Greek art.