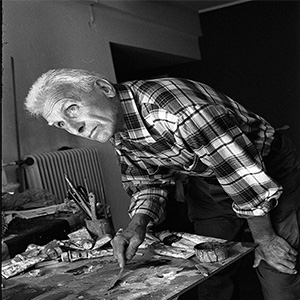 Panayiotis Tetsis was born in Hydra in 1925.
The first painting classes begin in 1940 near Klaus Frislander, and the next step in the process is the acquaintance with Pikionis and Hadjikyriakos-Ghika. In 1943 he is enrolled in the preparatory section of the School of Fine Arts in Athens with his teachers D. Bischinis and P. Mathiopoulos and the following year he is introduced to K. Parthenis’ workshop, but he will have the opportunity to attend only for a while because of his leaving last. He obtained his diploma in 1949 and in 1951 he was appointed editor of the Free Design Center, Professor Hadjikyriakos-Ghikas, at the School of Architecture of the Technical University of Athens. His didactical work continues in the private sector, between 1958-1976, when he was elected professor at the School of Fine Arts. With scholarship of IKY enrolled as a free student at the Ecole des Beaux-arts in Paris (1953-56), where he also attended engraving lessons.
In 1960, with an honorary scholarship from the Italian Government, he studied the Museums of the country, and in 1972 he was awarded the Ford Foundation’s sponsorship to dedicate himself for a year to engraving and painting. In 1948 he made his first solo exhibition at the Romvos Gallery in Athens. The same year he participates in the Pan-Hellenic exhibition. Since then, he has made more than forty solo exhibitions, while his group stays are over twenty. Among them are the So Paulo Biennale (1957 and 1965) and Alexandria (1959), as well as the International Exhibitions of Printmaking in Lugano and Tokyo (1960 and 1964). It undertakes the execution of frescoes for the decoration of public spaces, such as the Church of the Skaramanga Naval Base and the Orthodox Church of Rotterdam. Among the distractions he has won is worth mentioning the Critics Award (Keranis Prize) for his work “Shipyard” (1962). In the 1980s he translated and edited the edition of Cennino Cennini’s book of arts or treatise on painting.