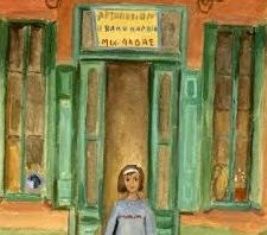 Maria Pop was born in Athens in 1925.
Characteristic of the generation of naïve painters, Maria Pop was the daughter of the Spanish violinist and conductor Joseph Bourneini, who served as the director and conductor of the Athens State Orchestra. Her sister was the award-winning novelist and translator Julia Iatridis. She was married to Athenian lawyer Konstantinos Pop, son of the well-known journalist and publisher of the newspaper “Athens”. In Aegina, it retained its characteristic and overgrown house in the area of ​​Faros, where at times it had hosted important personalities, such as the writer M. Karagatsis. Metaxourgeio, Monastiraki, Kastella, Hydra, Nafplio and, of course, its beloved Aegina – neoclassical buildings and traditional buildings, cafes, alleys forgotten under the Acropolis, old houses with their yards and trees – are depicted in works by Maria Pop. Still, painted memories of her trips to Spain, her second homeland.