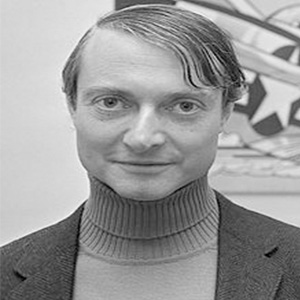 Roy Lichtenstein (October 27, 1923 – September 29, 1997) was a prominent American pop artist. During the 1960s his paintings were exhibited at the Leo Castelli Gallery in New York City and along with Andy Warhol, Jasper Johns, James Rosenquist and others he became a leading figure in the new art movement. His work defined the basic premise of pop art better than any other through parody. Favoring the old-fashioned comic strip as subject matter, Lichtenstein produced hard-edged, precise compositions that documented while it parodied often in a tongue-in-cheek humorous manner. His work was heavily influenced by both popular advertising and the comic book style. He himself described Pop Art as, “not ‘American’ painting but actually industrial painting”.
In 1960, he started teaching at Rutgers University where he was heavily influenced by Allan Kaprow, who was also a teacher at the University. This environment helped reignite his interest in Proto-pop imagery.  In 1961 Lichtenstein began his first pop paintings using cartoon images and techniques derived from the appearance of commercial printing.   In 1961 Leo Castelli started displaying Lichtenstein’s work at his gallery in New York. Lichtenstein had his first one-man show at the Castelli gallery in 1962; the entire collection was bought by influential collectors before the show even opened. In September 1963 he took a leave of absence from his teaching position at Douglass College at Rutgers.
It was at this time, that Lichtenstein began to find fame not just in America but worldwide. He moved back to New York to be at the center of the art scene and resigned from Rutgers University in 1964 to concentrate on his painting. Lichtenstein used oil and Magna paint in his best known works, such as Drowning Girl (1963), which was appropriated from the lead story in DC Comics’ Secret Hearts #83. (Drowning Girl now hangs in the Museum of Modern Art, New York.)
His most famous image is arguably Whaam! (1963, Tate Modern, London[), one of the earliest known examples of pop art, adapted a comic-book panel from a 1962 issue of DC Comics’ All-American Men of War. Most of his best-known artworks are relatively close, but not exact, copies of comic book panels, a subject he largely abandoned in 1965. (He would occasionally incorporate comics into his work in different ways in later decades.)
In 1977, he was commissioned by BMW to paint a Group 5 Racing Version of the BMW 320i for the third installment in the BMW Art Car Project.