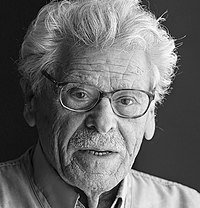 Costas Tsoclis was born in 1930 in Athens. From the age of 10 to 15, he lived in the war.
From the age of 14 to 18 he worked as an assistant of great masters in cinema décor.
At age 18, he entered the School of Fine Arts. At the age of 24 he served for two years in his military service. In these two years, however, he made two wonderful paintings, learned Italian and won a three-year state scholarship that allowed him to leave Greece as a cultural immigrant. In 1957, she married Fania Kaplanidou, with whom she had a daughter, the well-known journalist Maya Tsoclis.
For 11 years he lived in Rome and Paris. Belgium, Italy and Germany supported him and began to buy his works, write for him and organize exhibitions. In 1971, he left for Berlin, where he lived, worked and exhibited for 18 months. In 1971-1972 he lived in Berlin with a DAAD scholarship. When he returned to Paris, Alexander Iolas entered his life.
In 2010, the Museum with its name was opened in Tinos. There they organize, with Chrysanthi Koutsouraki, who directs the Museum, and exhibit every other year of his work, which helps him in self-knowledge and brings him into contact with another audience who had not known it before.