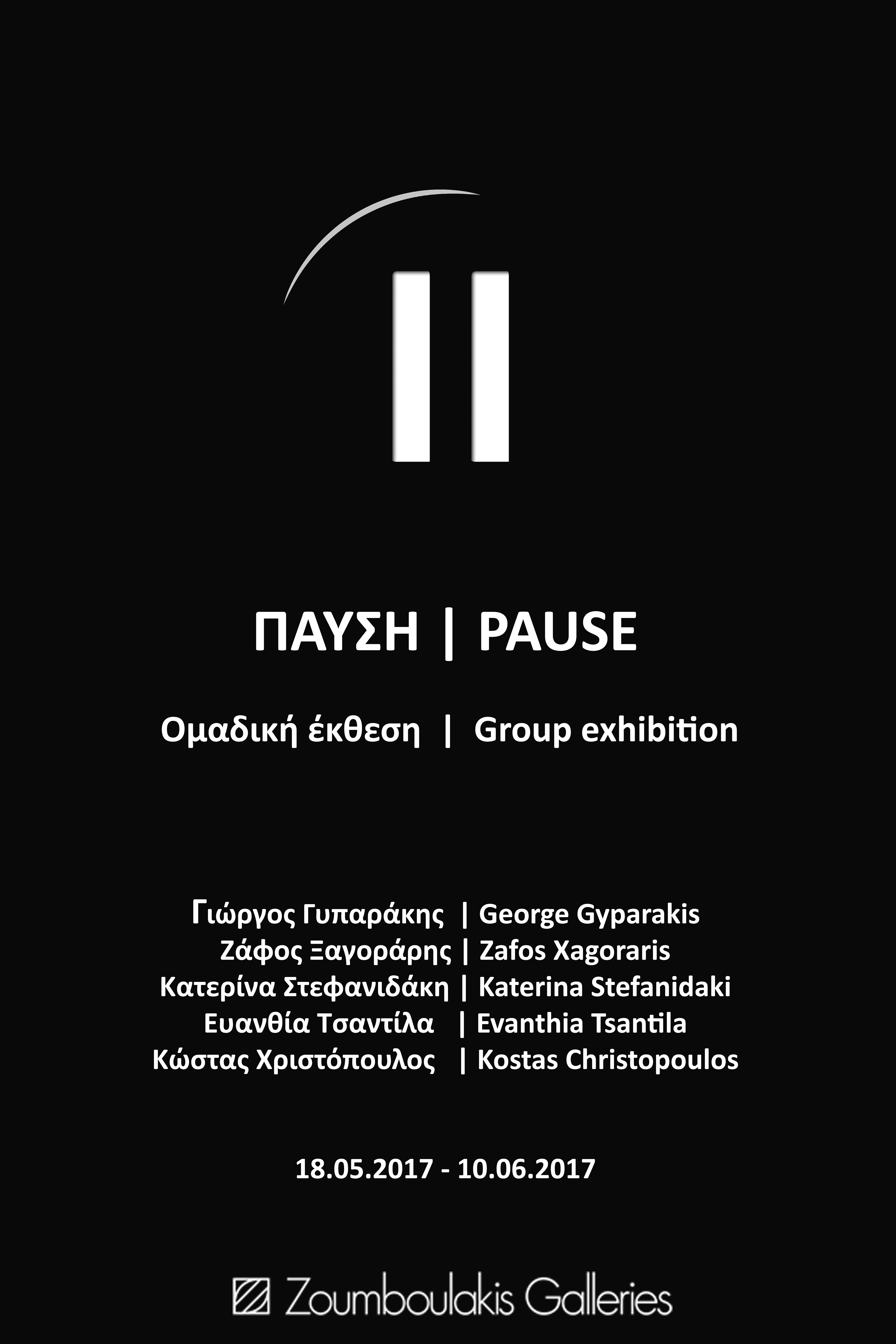 ‘Pause’ is defined as a silent interval. It is a short, brief moment in time which lasts. It is the absolute silence. Pause during a conversation is the moment where nobody speaks but thoughts keep evolving. In a theatrical play case, pause is the moment when actors prepare themselves for the next scene. In a musical symphonic part pause is the essential breath before the next musical expression. The concept of this group show uses the word ‘pause’ as a way to describe an image. It concerns works of art which, within a general state of agitation and a constant succession of events and actions, invite the viewer to take pause for a moment and think, to take a breath within the present time so as to reconsider the past and dream of the future.

‘Pause’ also refers here to a kind of interval in the series of works presented. Works made during the artists’ creative pauses, that are presented for the first time, that were meant to be created now, old works with new notional and expressive significances.

George Gyparakis presents the work “Plant Blindness” in which he rewrites his autobiography relatively to the story of his garden and in particular to the incidents relating to the life of a walnut tree. The concept “Plant Blindness” –term invented by the American botanists Wandersee & Schlusser in 1998 and which determines the incapacity/inability of contemporary man to see or to observe the plants within this environment- originates in the exhibition “Nice” (cur. Yiannis Gregoriades, Yiannis Isidorou, Nikea, 2016). The installation presented at the exhibition “Pause” constitutes a second autonomous version of the same questioning.

Zafos Xagoraris presents a series of drawings on ink in various dimensions. The series of works refers to the description of hypothetic installations in urban environments, whose realization has altered or postponed. The use of the drawing constitutes along with the visits, the possible recordings or assembly of mechanisms, a stage of movements’ sequence targeting to an often unified venture.

Katerina Stefanidaki presents a new installation of variable dimensions titled “Mine”. It describes an immobilized image of an explosion which dissects the painting surface and seems to move towards the viewer. The absence of sound or movement is replaced by the various images with which he is confronted. The different parts of the work, the floating overlapping of the drawings, without been visually apparent or surrounding the viewers, are all spread in the exhibition space, creating a variable off-frame image, a painting in the air. The work is in progress and is regarded as part of a series of works by Stefanidaki which describe the city and its mutations.

Evanthia Tsantila is showing a series of drawings, entitled “The Room / The Landscape”. Two of these are large-scale drawings and were first shown in 2006 at the “Grand Promenade” International Exhibition, organised by the National Museum of Contemporary Art in Athens. The artist explores mechanisms of memorialisation, mechanisms of production of meaning and the channels along which these travel and are transmitted. The imaginary landscapes she creates result from this probative and exploratory process. Her drawing compositions seek to question and disturb what appears familiar and unambiguous. How do past images appear in the present, what is their hold on us? What is transmitted by these images? Can it be named? How are such images to be taken up into the work of art and what is that is transfigured through them?

Kostas Christopoulos exhibits the painting “Histoire/II s’écrit”, 2007-2017. A work which is painted over an older one (2007) presented at the Action field Kodra at the exhibition “Meatspace” curated by Christopher Marinos. The initial image comes from the cinema newsreel of the Spanish Civil War. “History can be written” is the phrase read by the viewer on the surface of the painting. Which real events are transformed to historical events and which are the procedures that a work uses to pose a question indirectly? How can the interpretation of the past depend on the questions posed by the present and what is the meaning of the past’s recovery for the present? Finally, what is the stakes of this still? A work- reflection on contemporary quests. 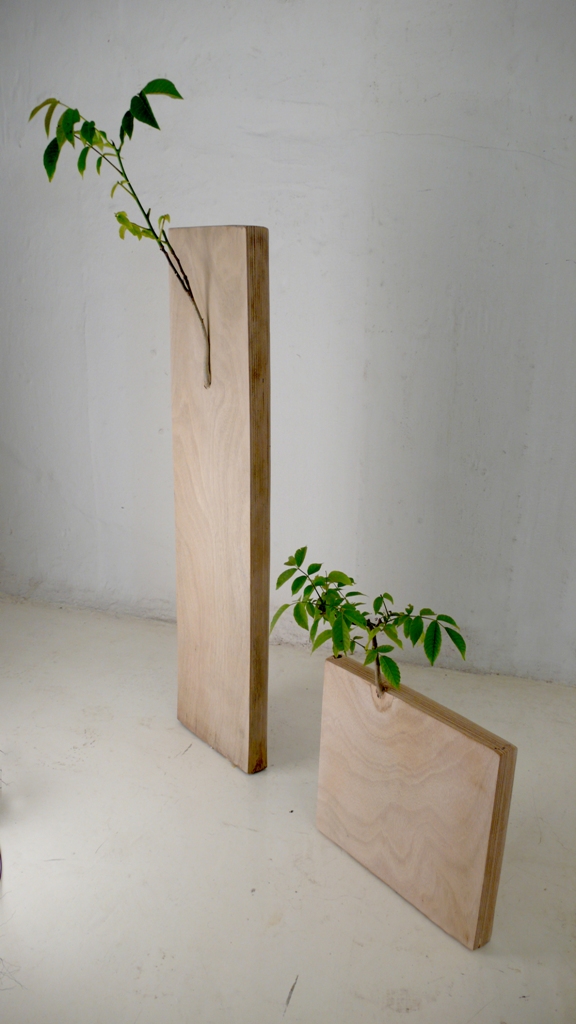 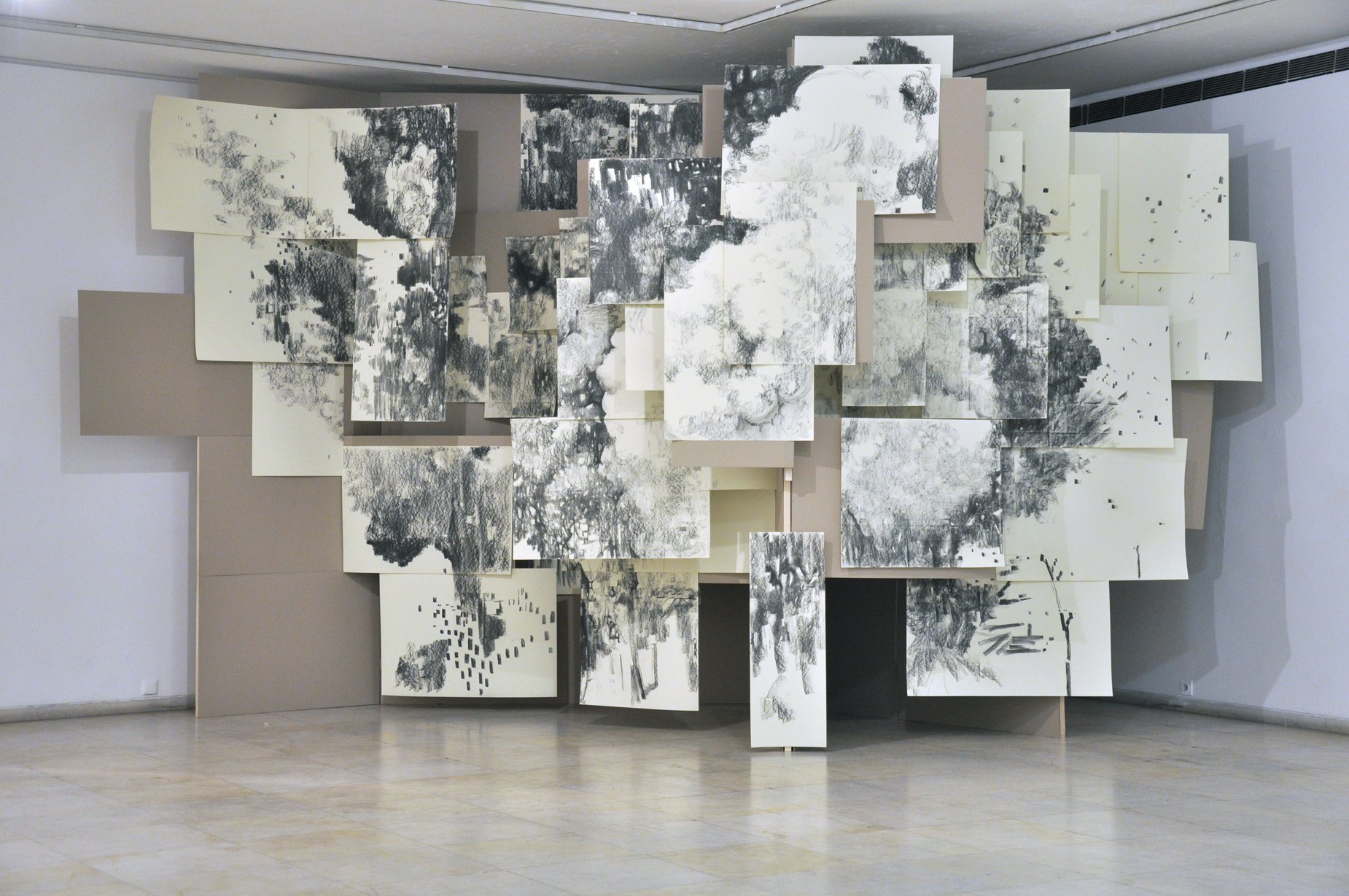 Katerina Stefanidaki, "Mine", 2017, Installation, Drawings on paper, made of wooden crates and cardboard, Variable dimensions 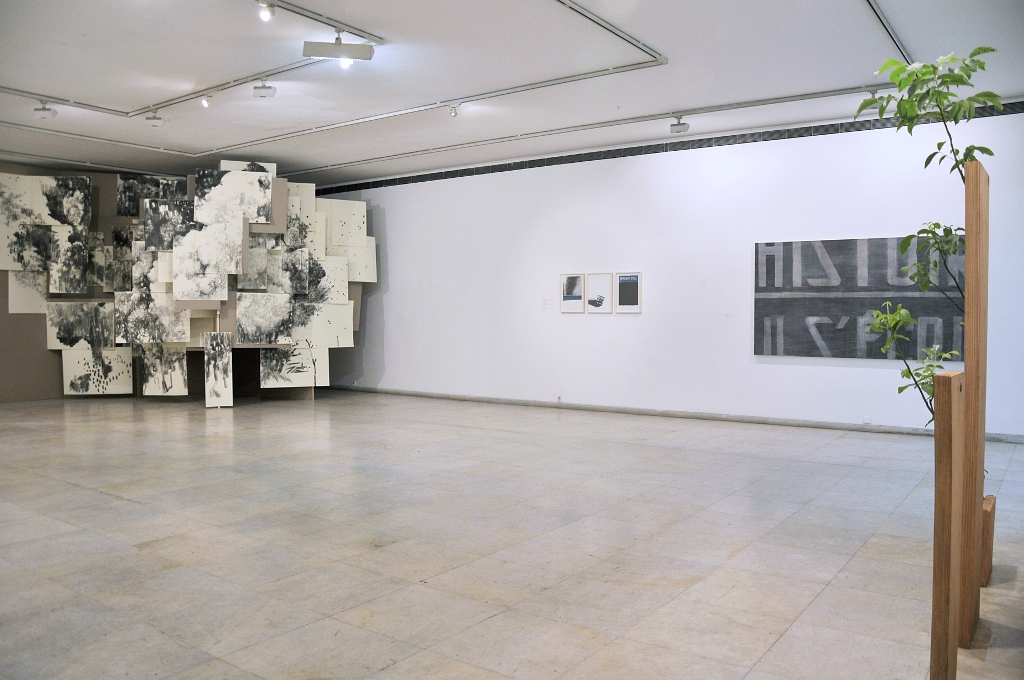 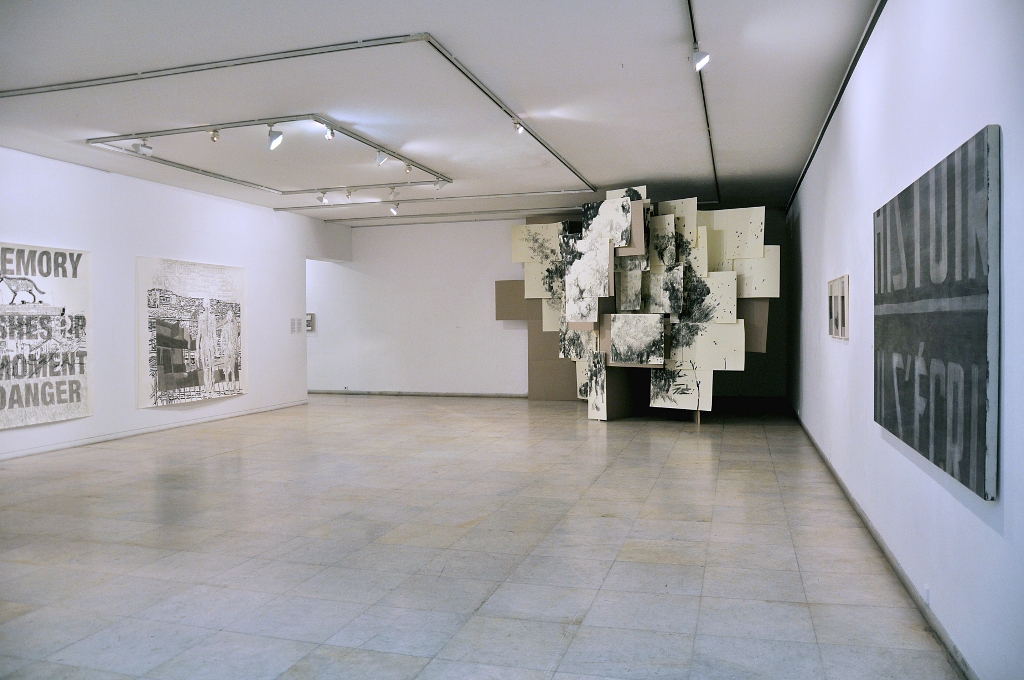