For more than a century, we have been narrating the story of Art’s journey through works full of stories and we have been bringing Contemporary Art closer to Greek homes.
1912

Theodoros A Zoumboulakis opens an antique shop in Athens. Specializing in rare artworks and antiquities, the shop becomes well known among the collectors of the period. 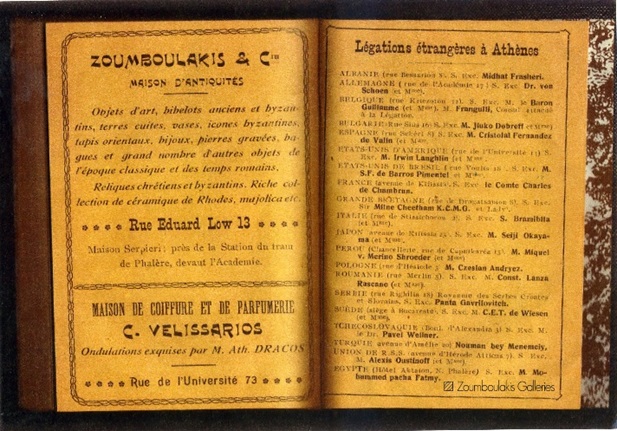 The involvement of the Zoumboulakis family with art and its various forms started in the beginning of the 20th century when Theodore Zoumboulakis opened his first antique shop in Edward Law Street in the center of Athens. It was in 1966 that Tassos Zoumboulakis with his wife Peggy, continuing the family tradition, opened -along with the antique shop, a new space of contemporary art in 7 Kriezotou street.

It has hosted, together with Kriezotou 7, some of the most well established and internationally acclaimed Greek and foreign artists. In the 1970s Zoumboulakis Galleries exhibited Dali, Magritte, De Chirico, Picasso (1979 in collaboration with Bayeler Gallery), Warhol. They have also introduced to the greek art public, movements such as Neo-realism in collaboration with Alexandre Iolas Gallery (Arman, Cesar, Deschamps, Dufrene, Klein, Niki de Saint Phalle etc.) and Kinetic Art with Denise René Gallery (Agam, Calder, Cruz-Diez, Soto, Vasarely etc.). 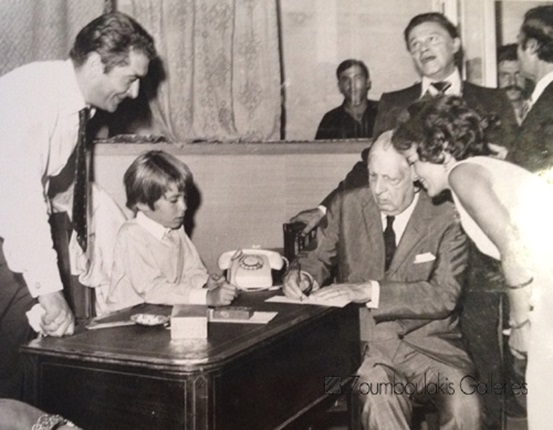 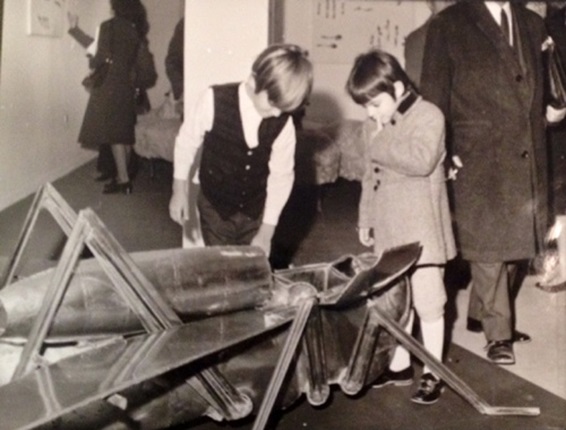 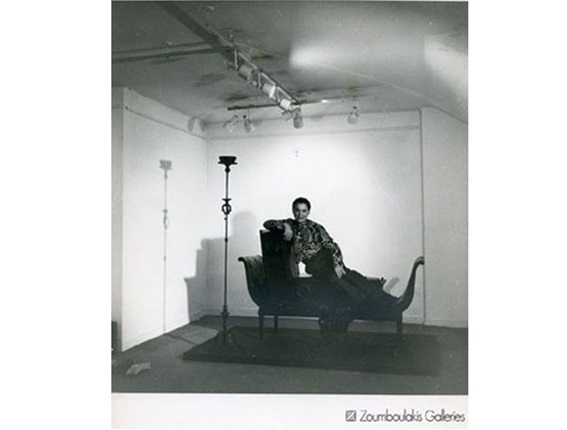 The Zoumboulakis Gallery takes a radical step for a gallery of that period, opening a new, 450 square metre exhibition space at 20 Kolonaki Square, in the nerve-centre of Athens. This massive space is the first of its kind in Greece, offering artists a state-of the-art venue for the display of large-scale works, and attracting a broader audience to contemporary art. Takis, already well-known abroad as a sculptor, inaugurates the gallery with a stunning array of his most important work. Chryssa follows, with the first Greek showing of her massive, world-renowned sculptures. A new cultural age is dawning in Athens, and the Zoumboulakis Gallery bears the hallmark of a new era. Through Iolas, important foreign artists are becoming known here, whilst the Zoumboulakis Gallery is forging collaborations; with the Denise René Gallery in Paris, the Beyeler Gallery in Basle for a Picasso exhibition, and with Gimpel Fils in London. The Gallery hosts such spectacular exhibitions as The Neorealist Movement curated by the art critic Pierre Restany, and Mirrors of the Mind which was curated and introduced by the poet and friend of the Gallery, Nicolas Callas, and many other events of note. Contemporary art is ever-increasingly a part of the lives and homes of Athenians. A new, internationally aware spirit is spreading, also affecting interior design. The number of art lovers and collectors is burgeoning, and new ideas are taking hold. 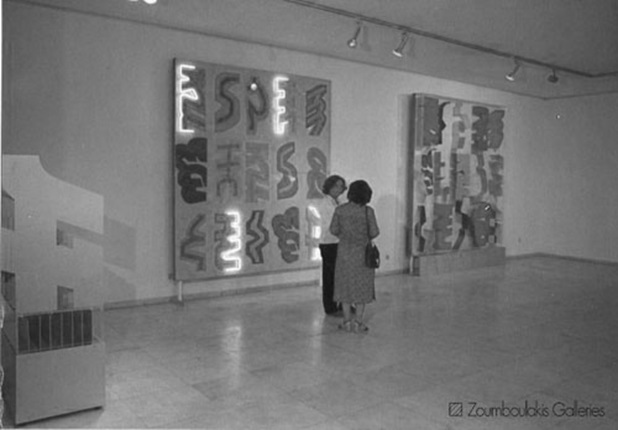 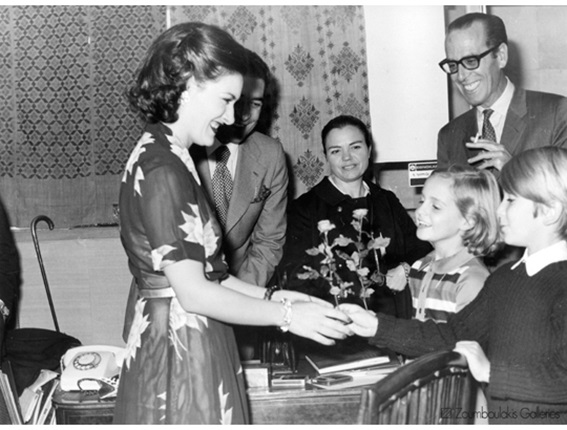 Paloma Picasso at 7 Kriezotou str. gallery during her solo exhibition in 1972. She presented for the first time he jewelry in Greece. Theodore and Christina Zoumboulakis are pictured.

The Zoumboulakis Gallery acquires an additional exhibition space, off Pireos Avenue, in the emerging cultural district of Athens. A former factory is transformed by the architect Theodore Zoumboulakis into a multi-purpose cultural space capable of hosting exhibits, concerts, theatre performances and happenings. Particularly notable are exhibits examining the coexistence of the contemporary with the old, placing carefully selected timeless objects in conversation with modern works. These exhibits prove immediately popular with the Greek public. 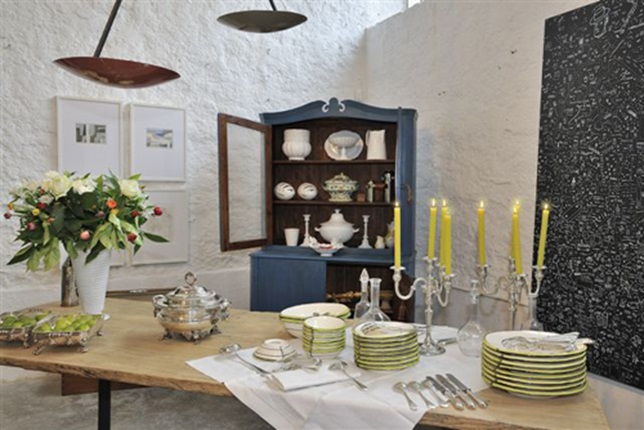 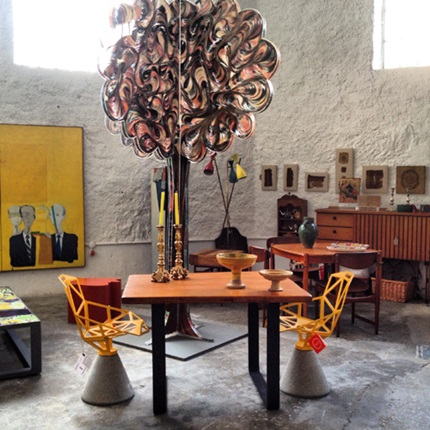 Daphne Zoumboulakis takes over the management of the Kolonaki Square Gallery. Artists from the generations of the 80’s and 90’s join the Gallery. In 2007, the Zone D project is established to mount exhibitions outside the gallery spaces, showcasing new trends in contemporary art. 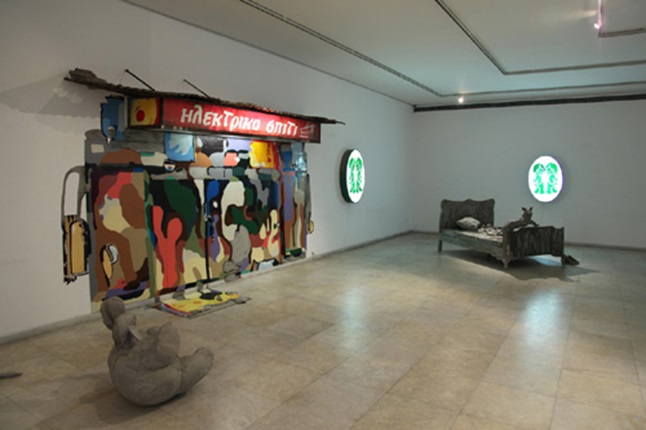 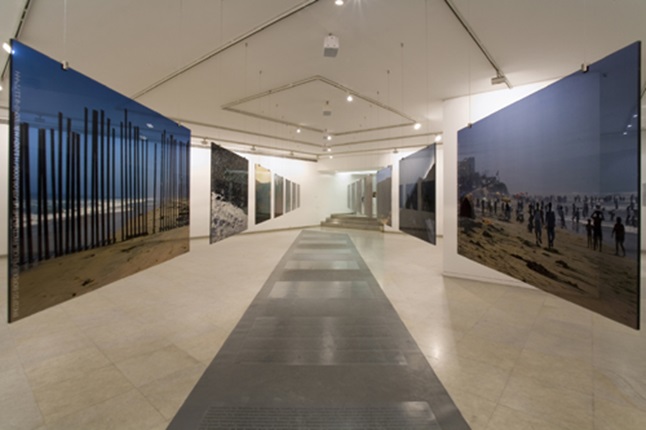 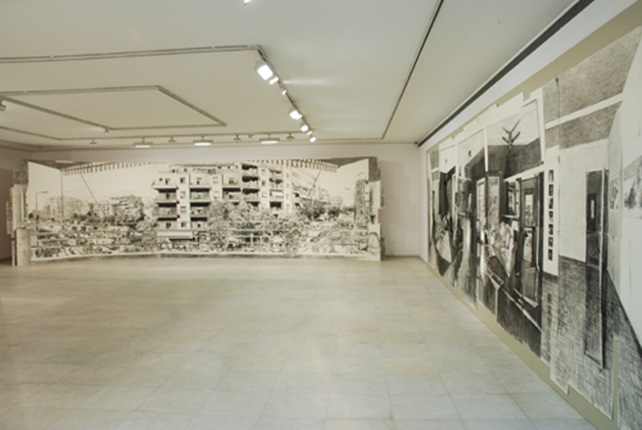 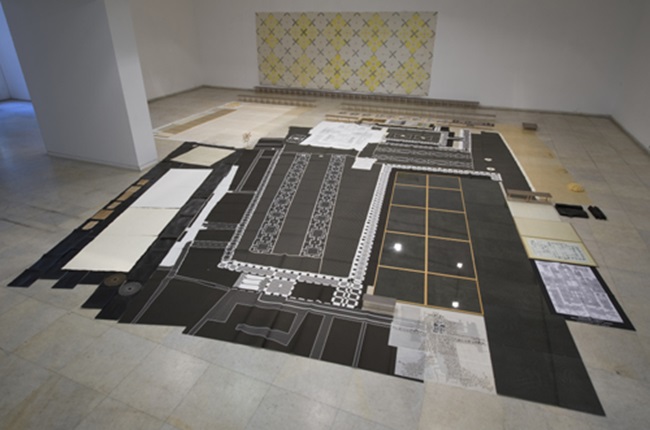 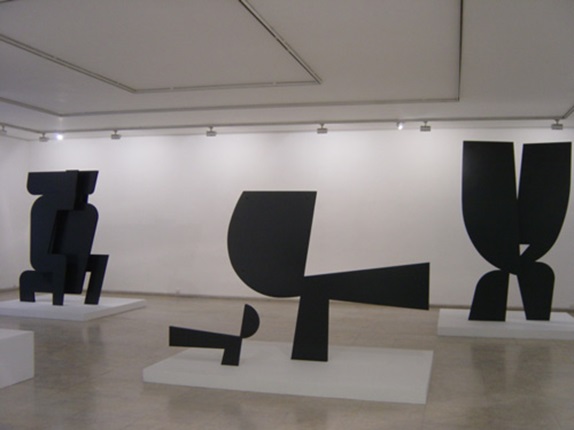 With the opening of Art-Design-Antiques, a new proprietary space at 6 Kriezotou Street, the Zoumboulakis Galleries continue to expand and diversify. Here, contemporary art coexists with the past and the future, proposing a genuine aesthetic of interiors. There is no pompousness here, none of the artificial luxury of the urban mindset; instead this approach is original, and informed by an artistic sensibility. It proposes a different, unpretentious way of life; timeless, rooted in quality, imagination . . . and humour! The Gallery forges collaborations with international companies, such as Established & Sons, Astier De Villatte, Magis, and others. Such timeless, harmonious works as the innovative table/sculpture Aqua Table by Zaha Hadid, and Phillippe Starcks’s Baobab desk are introduced to the space.
The architectural firm responsible for all Zoumboulakis Galleries spaces is www.zoumboulakisarchitects.gr 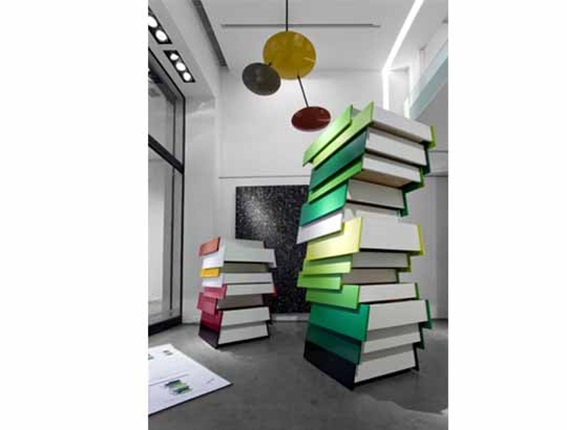 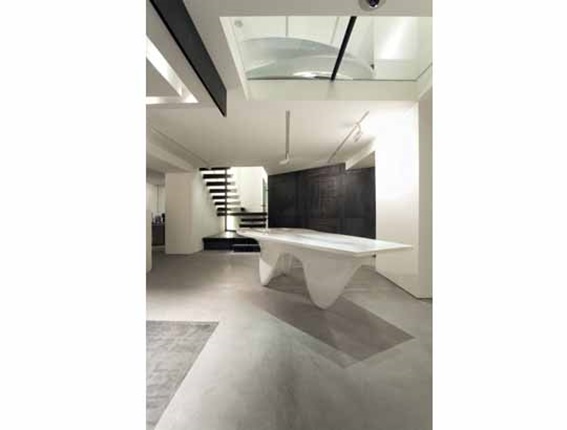 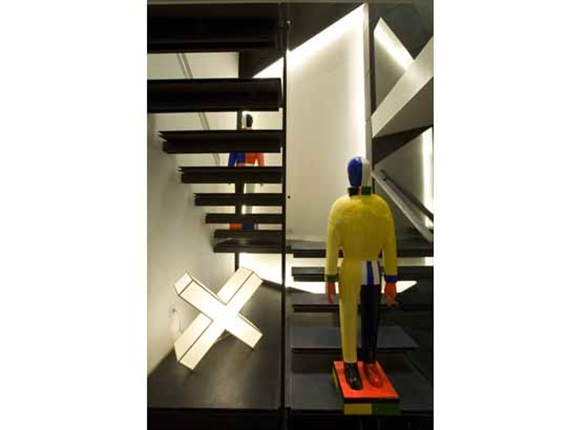 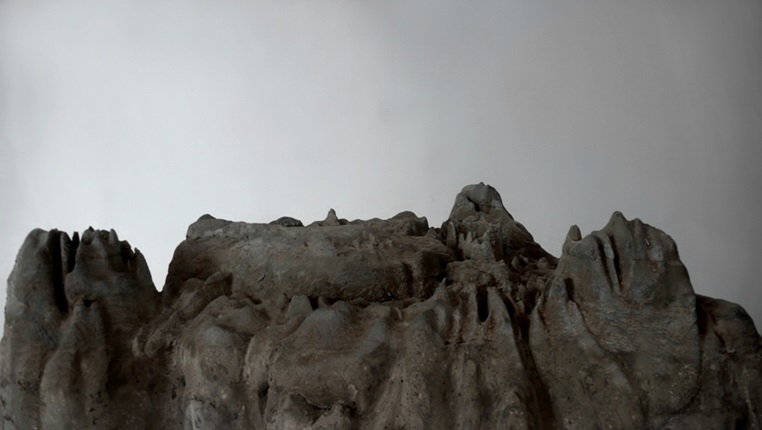 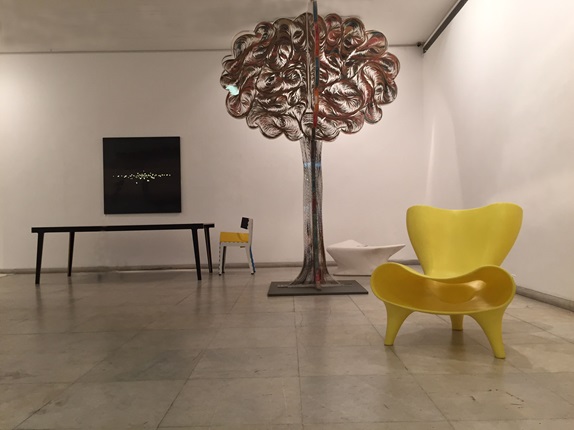 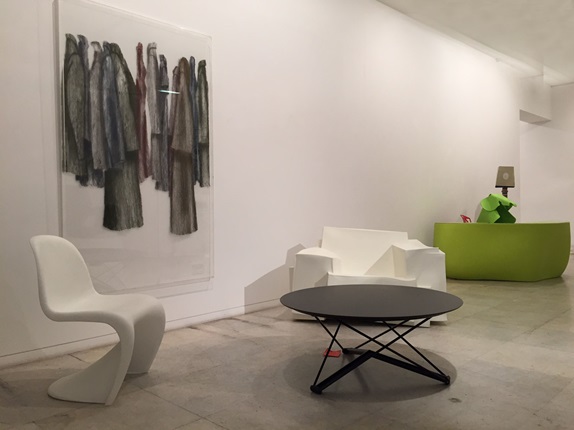 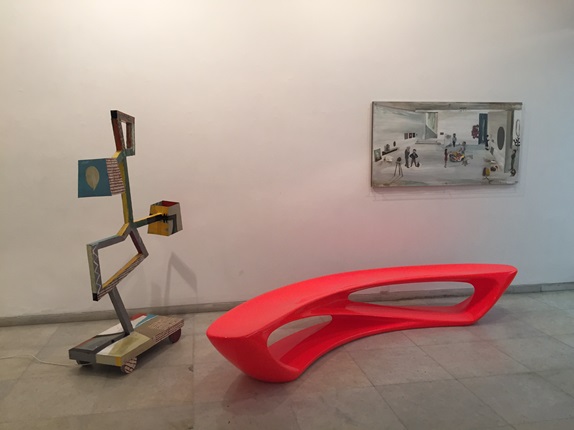 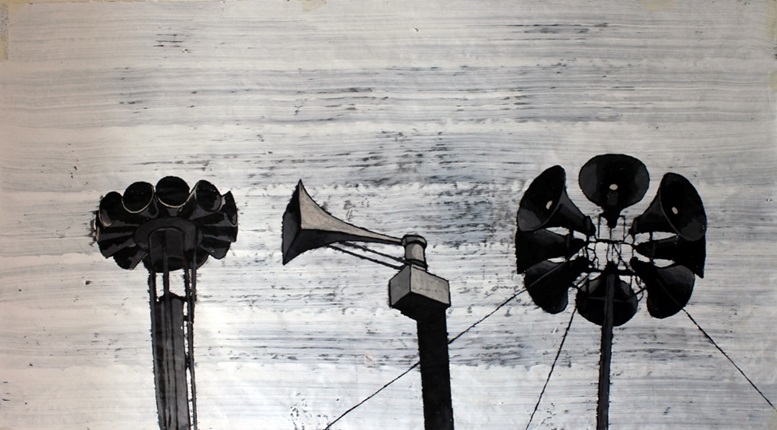 Zafos Xagoraris from his solo Exhibition Sound Drawings, April- May 2014 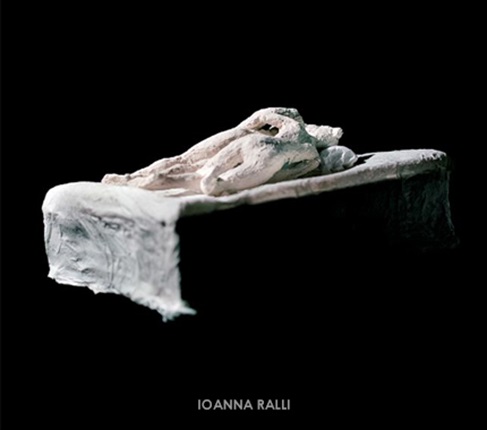 Ioanna Ralli, from her solo Exhibition "Dreams and Symbols", January 2016 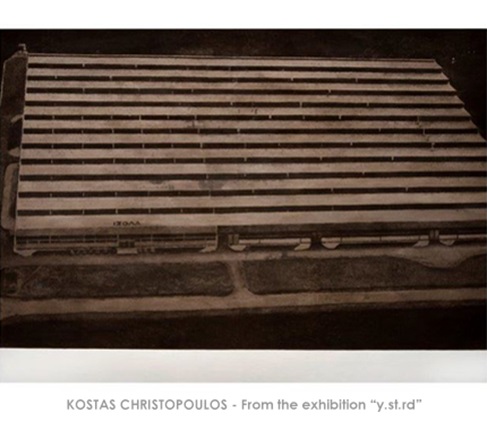 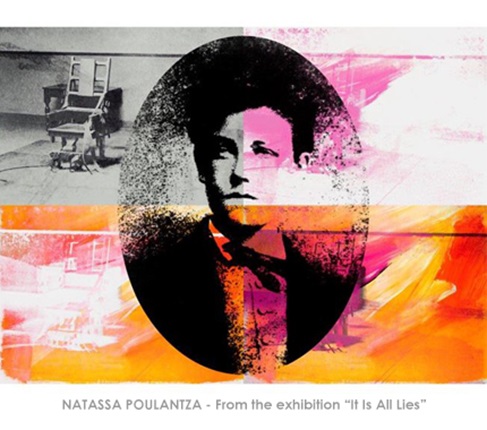 Natassa Poulantza, from her solo Exhibition "It is all lies", June 2016 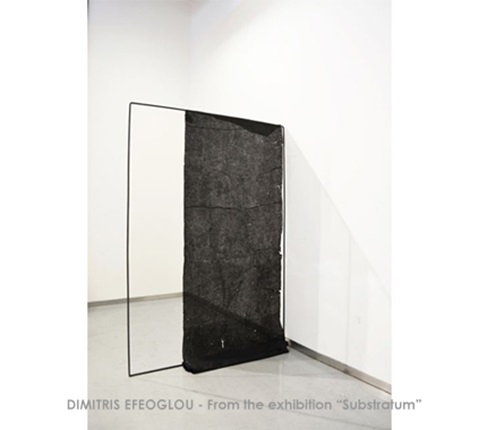 Dimitris Efeoglou, from his Exhibition “Substratum" with Despina Flessa 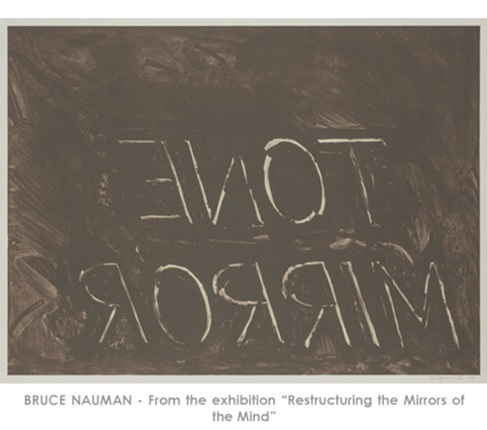 Bruce Nauman, from the Exhibition "Restructuring Mirrors of the Mind by Nicolas Calas", October 2016 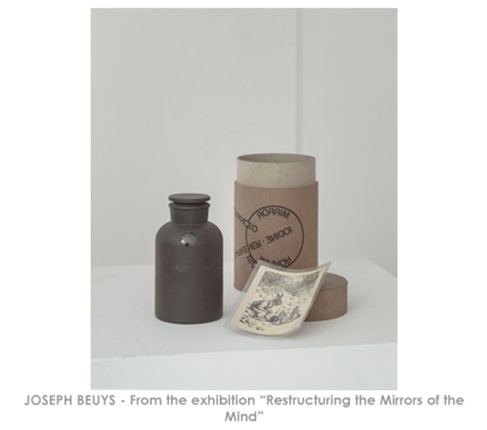 Joseph Beuys, from the Exhibition "Restructuring Mirrors of the Mind by Nicolas Calas", October 2016
2017-2019

20 Kolonaki Square Zoumboulakis Gallery is renovated by Theodore Zoumboulakis (Zoumboulakis Architects) and re-opens with the important historical exhibition
“321 | 426 | 52” which presented posters from the Gallery’s course, from the 60’s up to nowadays.

Anna Fafaliou, from her solo Exhibition, "There is a light that never goes out", January-February 2019

Anna Fafaliou, from her solo Exhibition, "There is a light that never goes out", January-February 2019

Marina Karella & Jack Pierson, from the Exhibition for those of us who know, we know..., June 2017